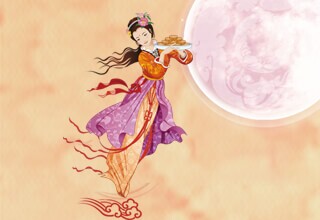 The Moon Festival is celebrated on the 15th day of the 8th Lunar Month and has been a huge celebration in mainland China for around 3000 years. There it is known as middle autumn festival (???) and it marks the end of summer harvest. So apart from the abundance food around at this time of year, legends and traditions were developed over time that are still celebrated today.

It all started as a way to give thanks for a bountiful harvest.

Legend has it that a famous archer HouYi shot down nine out of ten suns, saving the earth from being scorched. As a reward the Queen of Heaven gifted him the Elixir of Life, which grants immortality.

Hou Yi could not live without his wife Chang’e, instead of drinking it he gave it to her for safekeeping. However, there was attempt to steal it from her while Hou Yi was hunting by one of his disciples Peng Meng. To prevent this from happening Chang’e drank the Elixir and floated up into the heavens to live out eternity.

To stay close to her beloved Hou Yi she chose to stay at the closest place possible, the moon. When Hou Yi returned he was devastated and furious. He shouted to the heavens and discovered that the moon was so very bright and clear that night and caught sight of a swaying figure that resembled Chang’e.

To honour her Hou Yi burned incense and placed fresh food and moon cakes on a table.

Of course, the 15th day of the 8th lunar month falls on an equinox. On the day of an equinox duration of time during night and day are approximately the same all over the planet. Marking the beginning of Autumn in the northern hemisphere and Spring in the southern Hemisphere.